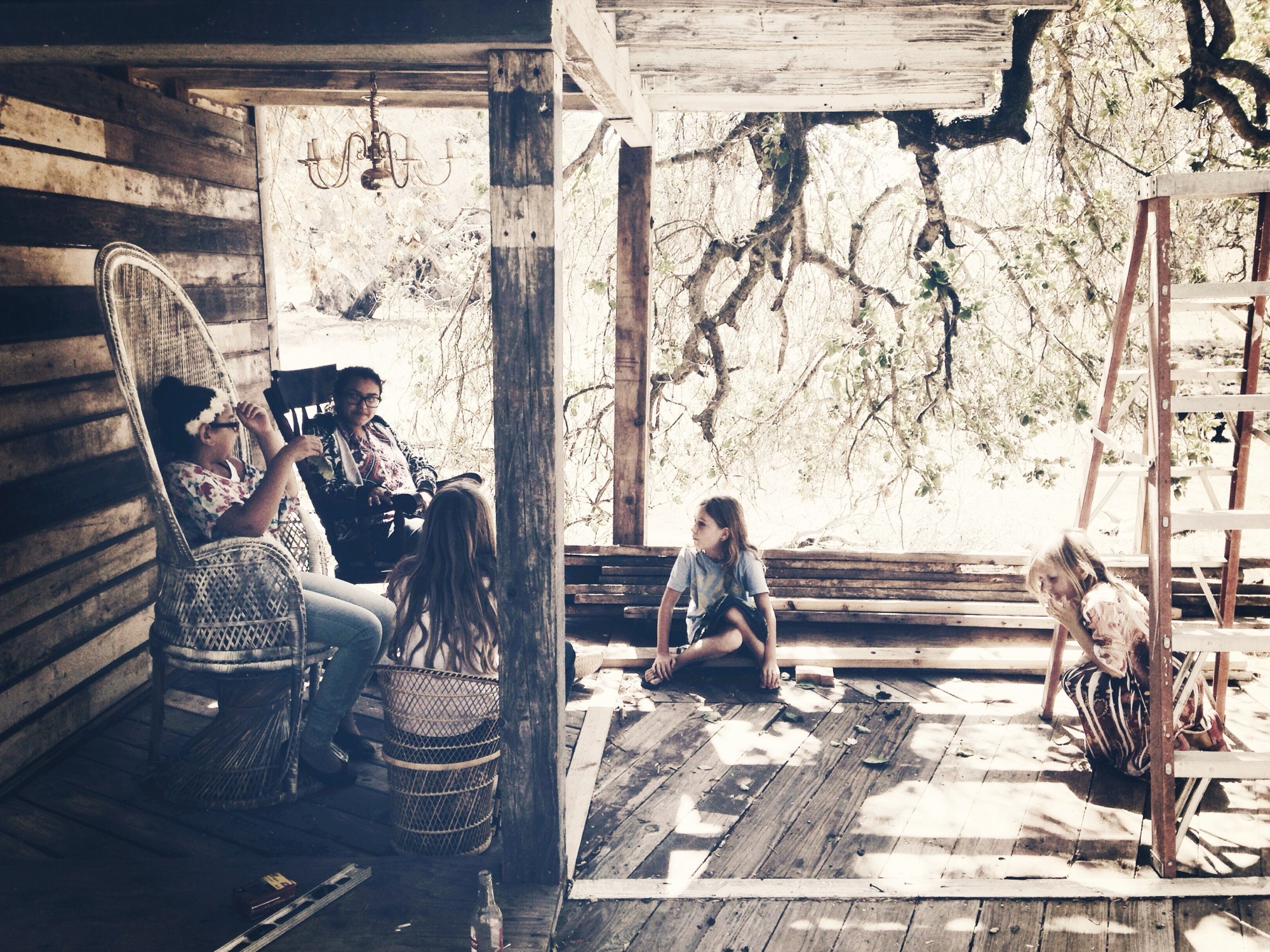 I should probably begin this post by clarifying the number 1 most frequently mistaken concept relating to this whole project… I am not in fact, building a tree “fort”. It seems that when people hear about my project, they immediately picture me creating something like this….. 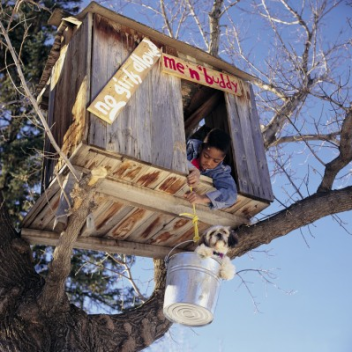 And I’m always slightly confused when people call it a tree fort….

I can’t really think of any reasons why I would want or need a fort…   Are the British coming to invade? Is there a tribe of wild Indians nearby threatening my scalp? No. I am not building a fort. This is a tree HOUSE.

Just thought I should throw that out there to clear up all the confusion.

Its a house.
With a tree in it.
Not a fort of any kind.

It’s a sensitive subject. Moving on….

This January began year 3 of working on Eaglehurst. I didn’t really anticipate that it would take me so long to build it, but then, I’m finding that plans don’t always dictate reality. 🙂

I posted the early stages of building Eaglehurst here. I’m not sure how long it will take me to finish it, so I figure I’ll just post an update periodically until it’s done.
(But, I’m pretty much planning to finish it this year….)

Last year at this time, this little house mostly just consisted a floor with one wall framed… 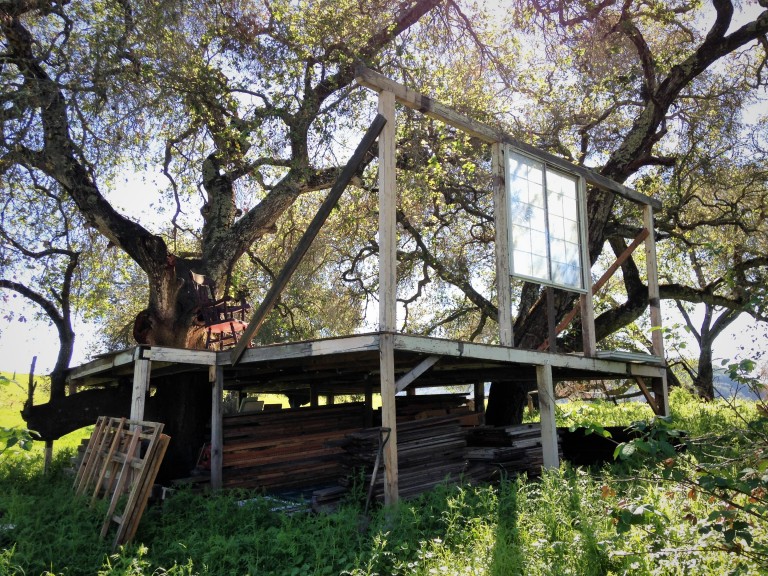 It was pretty fun walking around on this floor for the first time. The fact that it actually turned out was so very satisfying… And relieving since there was a lot of guess-work that went into it… I started imagining where everything would go, and how I would build the rest of the house on top of this little foundation.

Cause, where was I gonna put the bathroom? And how would I have sleepovers in the loft if my loft was mostly full of tree branches…? 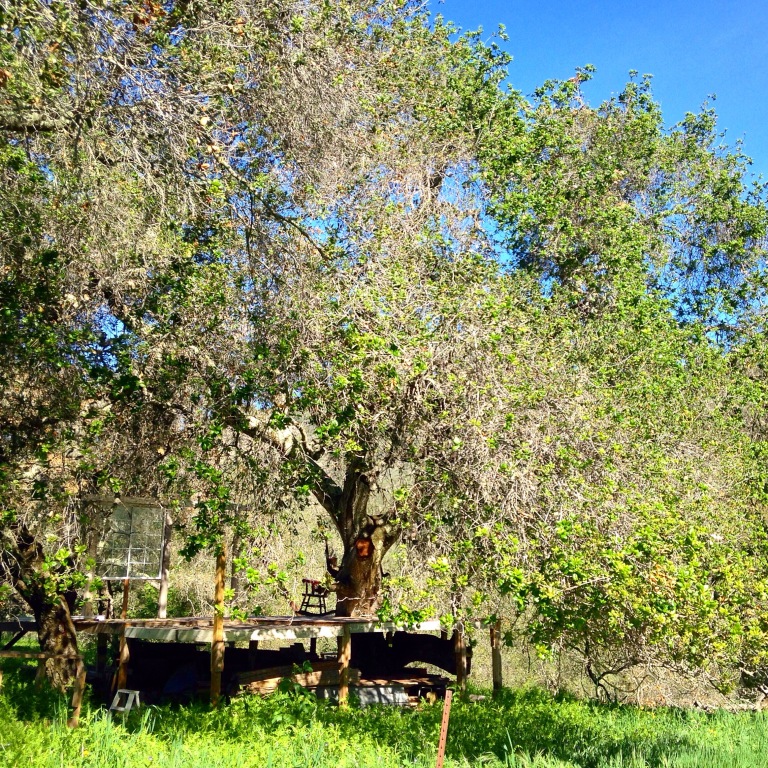 And then I noticed this nice little space, between the outer branches and the edge of my house…

It was really a perfect place to add on just a bit.. Only like, an 8×20 foot section…

I hemmed and hawed about adding it cause I didn’t want to take the time to add it on there. I just wanted to frame it already and get it done. But, even though it was gonna set me back a month or maybe more, I realized that at some point, this stopped being just a tree house, and it turned into some kind of work of art for me… And with art.. You just can’t rush things. You have to let it become what it wants to become. No matter how much you just want it to be done already.

And so I added on… But this time I put in tall beams along the edges so that whole side would be framed and ready for me once the floor was added.

And yes, I used a string and tried to make it straight and everything! And I mixed cement for the poles! 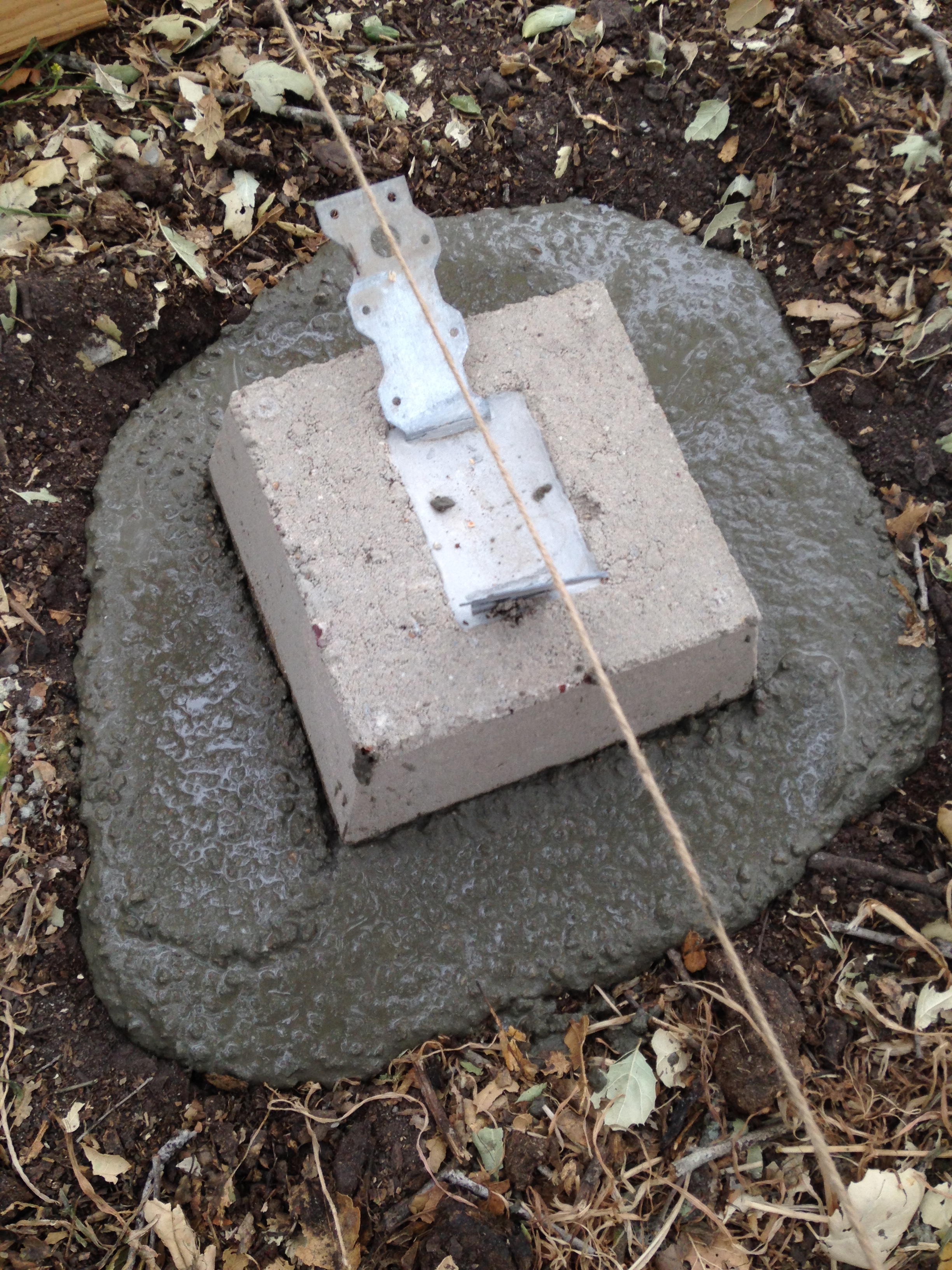 I even drew up a sketch of how it could look…. Kinda like, a very rough game plan..

I unashamedly solicited my young friends to help me. (Better than watching Netflix..!) They are the best! 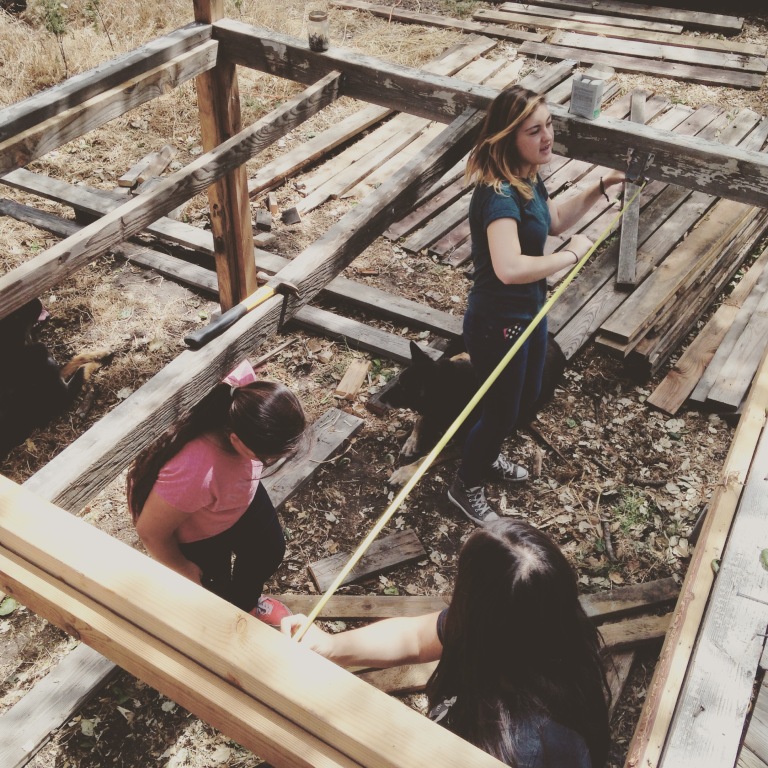 My favorite is when I get to start piecing on the floor boards. I have all this wood and windows and things I’ve collected or been given, and it’s fun to discover where each piece wants to belong. 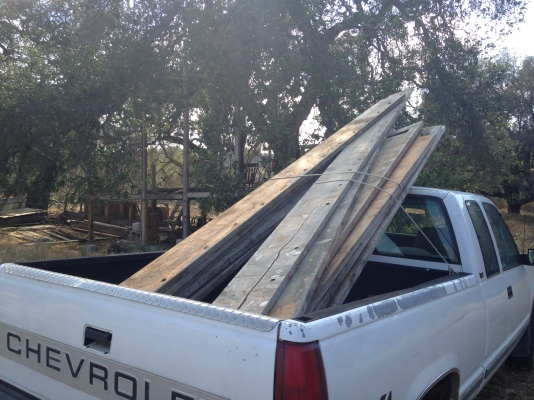 This little floor section was fun cause I found that I had an exact number of similarly shaped boards that were all just the right length for this little addition. 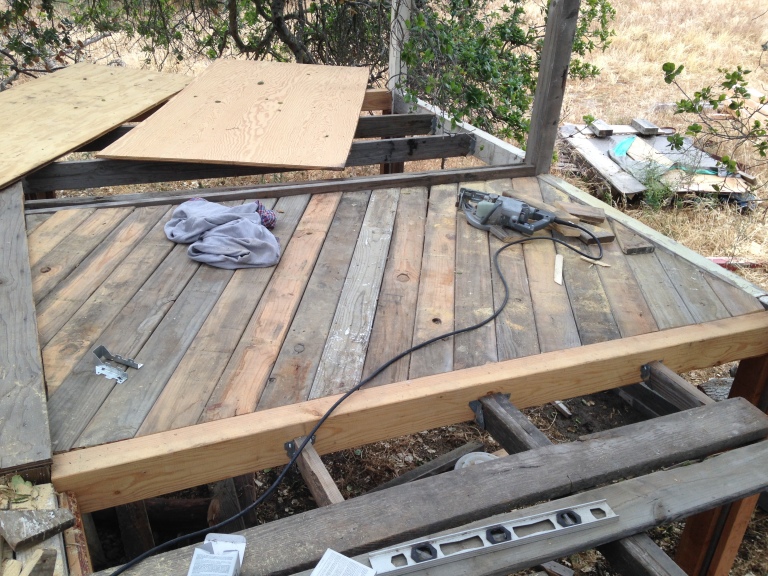 It came together so well! It was worth the extra time and work. Now, time to frame the loft!

I just happened to have four big square beams that were all six feet tall, and they seemed like they wanted to frame my kitchen wall. They were perfect. Only problem would be that a six foot wall makes for a very low ceiling under the loft… But eventually I figured out a way to stack the beams across the top so it would give my roof level almost another foot of clearance. Just in case tall people want to come over!

I cannot fully describe the level of exhilaration I felt at seeing these beams standing in my house. It was surreal. For months I carried around the mental image of how it could come together, but seeing it take shape in real time and space was very… inspiring and, almost shocking in a weird way. Maybe cause people kept acting like I couldn’t do it or I was never gonna finish.. Idk, it just felt good to see it come together. Even in this infant stage! 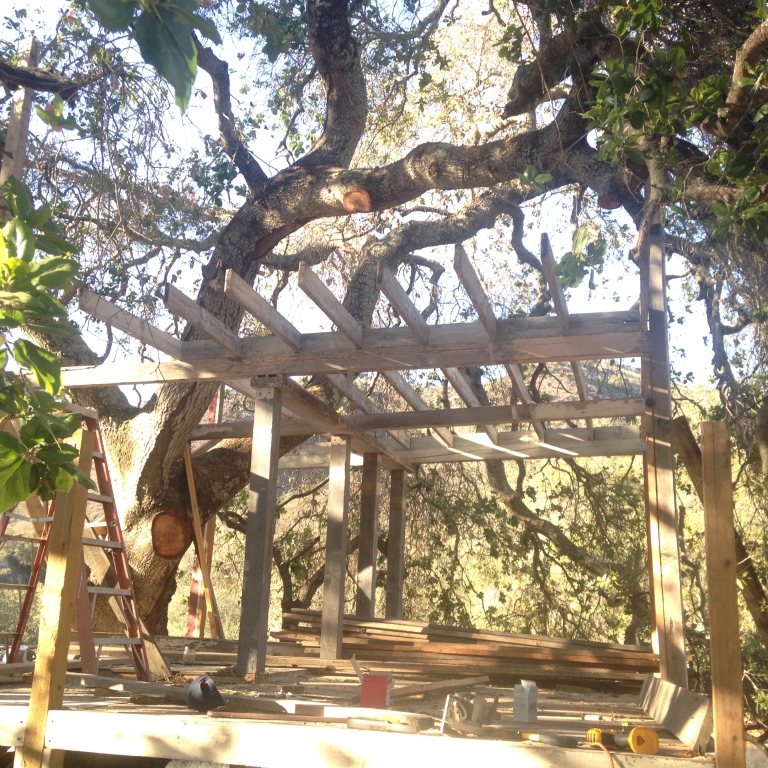 People ask me a lot “How did you know how to build it?” and the answer is, I really never know.

I just stare at it a long, long, long, time until I solve whatever problem I need to solve in order to add the next thing. And I don’t worry about making it perfect. Nothing is straight or even and I mostly just eyeball things rather than measuring since I can’t do math. But that’s the great thing about building a tree house. No one can say you’re doing it wrong cause every tree house is unique and wonderfully different.

I had never realized it before, but I discovered through this process that I have a huge passion for problem solving! I don’t know why but it just makes me happy.

I think that if I needed to know how to build it before starting, I would have never started. It seems like if you want something and you are willing to work at it, you can pretty much figure out ways to make it happen, even if you don’t really know what you’re doing.

It literally took me hours of staring at this tree to finally figure out a way to make it all work. I would keep finding ways to meet 2 or 3 of my criteria, but not all of it.

It’s so hard for me to compromise my ideas once they land in my head, so, I kept working out designs and eventually I found the right one!

It’s always a little overwhelming to begin each new phase. So inevitably I end up procrastinating. Usually I figure if I just make myself do at least one tiny thing per day until I work through the hard parts, it will eventually all start to make logical sense again.

Framing the counter levered balcony floor around that big tree trunk was no easy task. I kept almost deciding to skip the balcony, but, I just couldn’t bring myself to do it!

I had already seen it in my head and it looked amazing, so I just couldn’t give up on it.

I had to consult some help from the internet and my contractor friends though to make sure it was all gonna hold up!

One day, just as I was ready to lay on floor boards for my loft, I wished for enough plywood to cover the whole loft floor, because buying new wood is expensive! And that day someone from a construction site posted piles of their work scraps on craigslist for free. So I got all the plywood I needed, plus more.

I love how God always makes sure I have whatever I need or want for this project.

Piecing it all together on there was a little bit like creating a giant puzzle out of oddly shaped wood pieces that have to be individually re-sized to fit into place… So basically a nightmare.

But, whatever, I saved 400 bucks. And I’m planning to cover the whole thing with wood floor boards anyways, so, the patchwork won’t even show.

Walking around on my new loft feels a little like opening presents as a kid at Christmas time. So exciting!

I kid proofed the loft by making it so the little step stool can be moved away from the tree, thus removing access to the stairway for little people.

(Not that I really plan to keep kids out…) 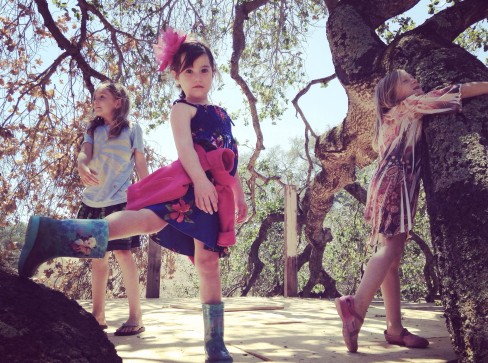 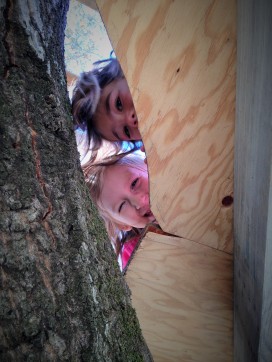 Years ago, my dad had gotten a bunch of boards from an old bowling ally. They’d sat for a long time getting weathered and several weren’t usable, but I salvaged enough to use for a couple of the walls. 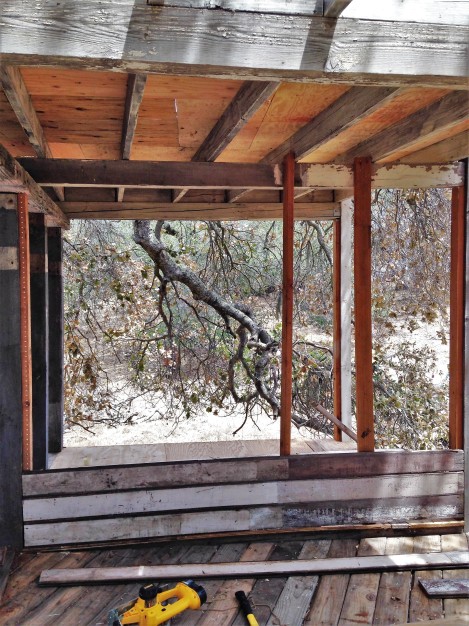 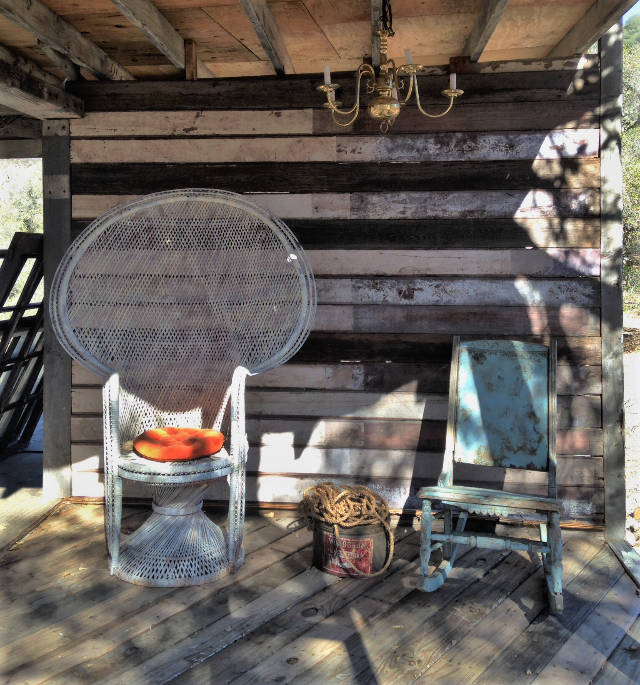 It turned out so well! 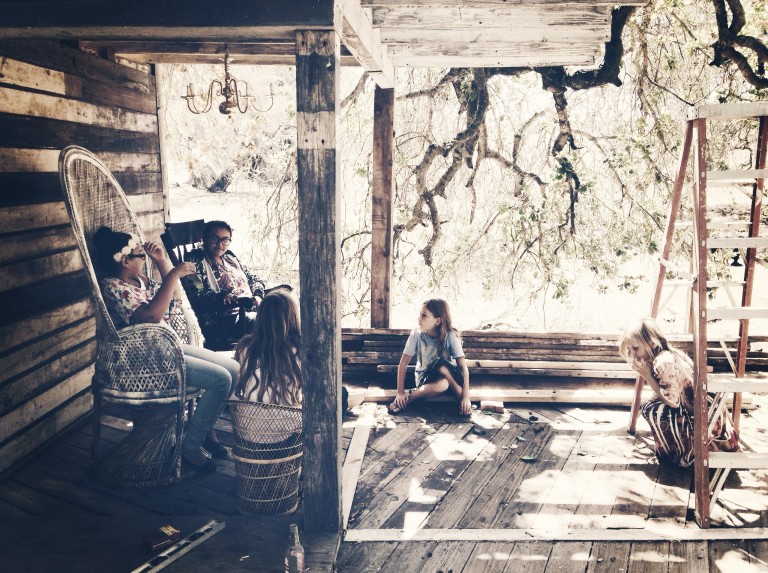 The nieces love coming up here with me.

They always want to help. 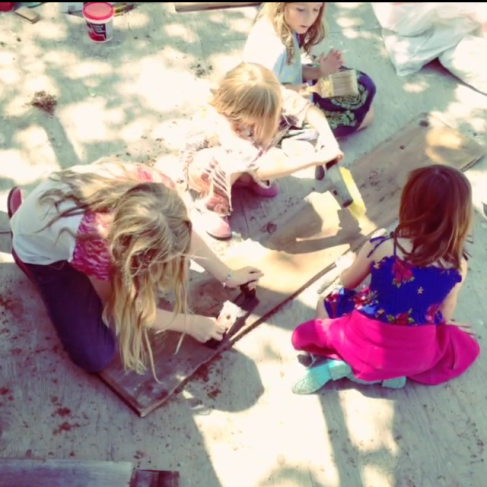 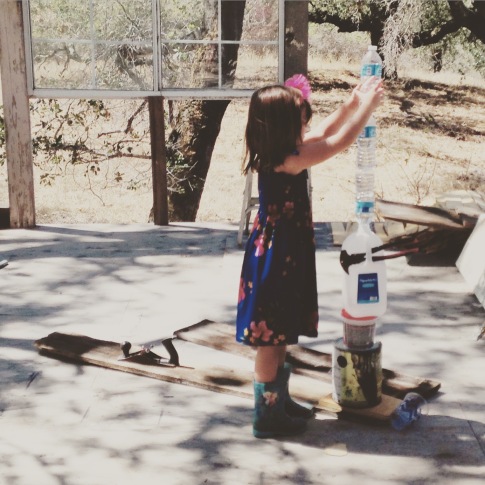 And it’s a good spot to just chill, or hang with friends.

Sometimes I don’t get much work done cause I get distracted by all the beauty surrounding this little spot. 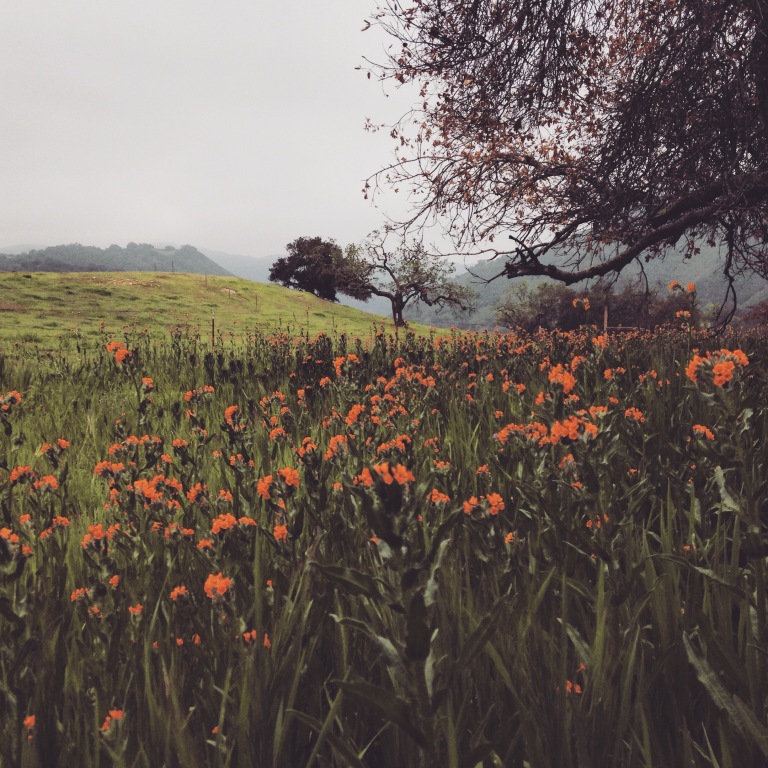 Getting the roof framed proved to be the scariest part of the whole deal. 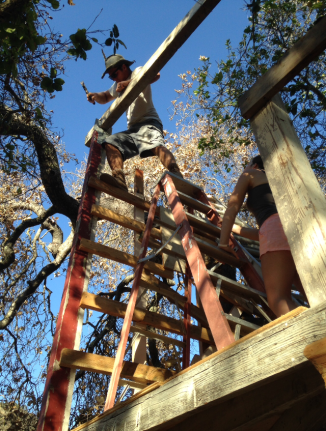 The ladder barely fit onto my loft and I had so much trouble getting that 16 foot beam lifted up that high. Finally I had to get my bro to do it for me. He’s not afraid of heights and dying like me.

It was around summertime, that I started having a little problem with my tree.

The drought got to it and it started dying. 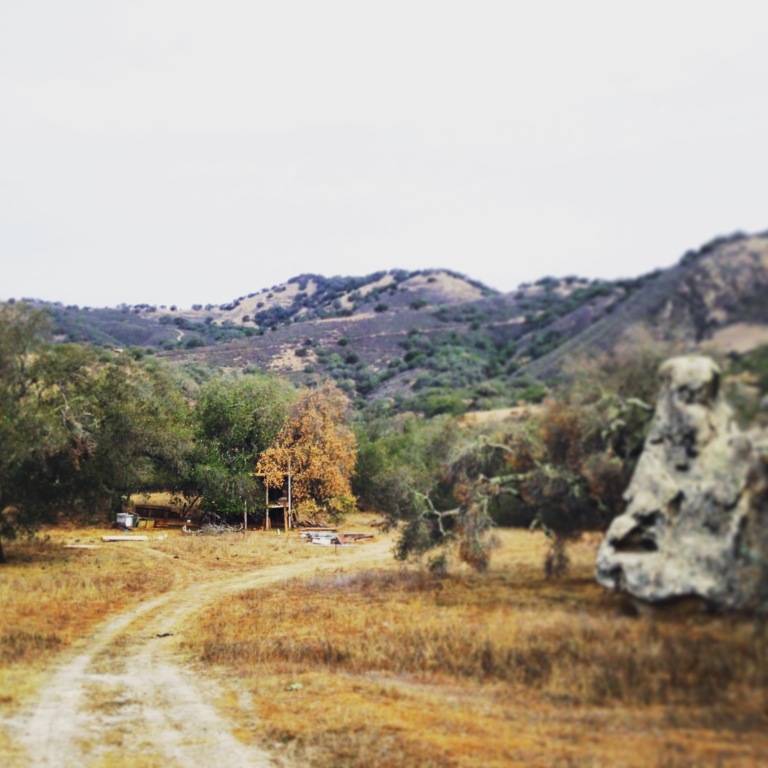 I carted in buckets of water to try and bring it back to life, but, to no avail. It died. 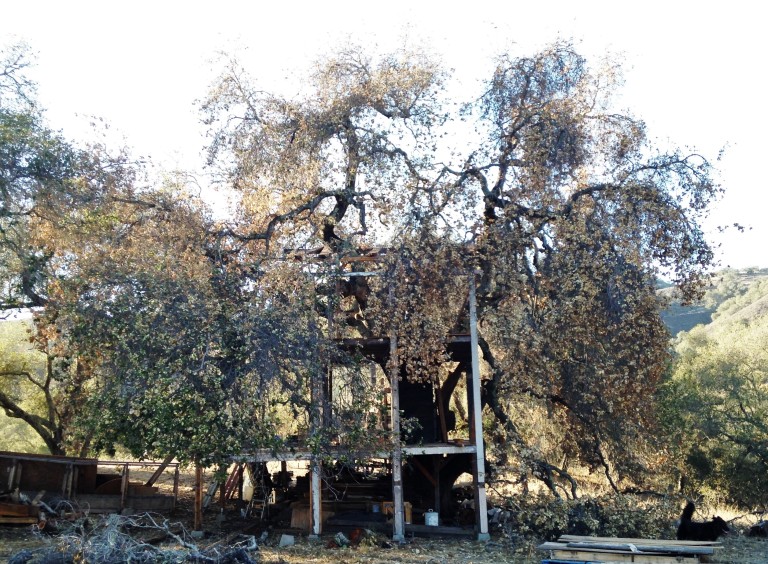 I had built it knowing that it might die someday, (didn’t know it would be so soon!) and so very little of the house relies on the tree for support. So that’s good, the only problem would be getting rid of the dead branches, without ruining the house in the process.

My bro helped get it out of there. And by helped, I mean he did it while I took pics. 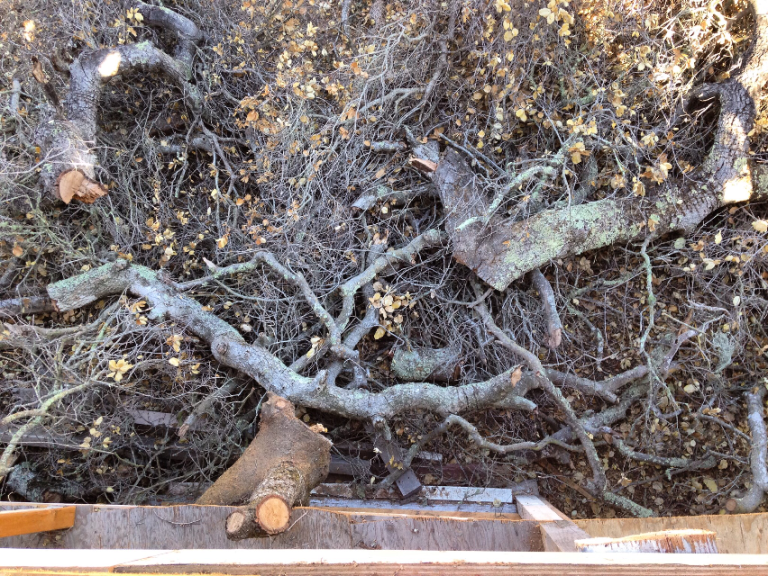 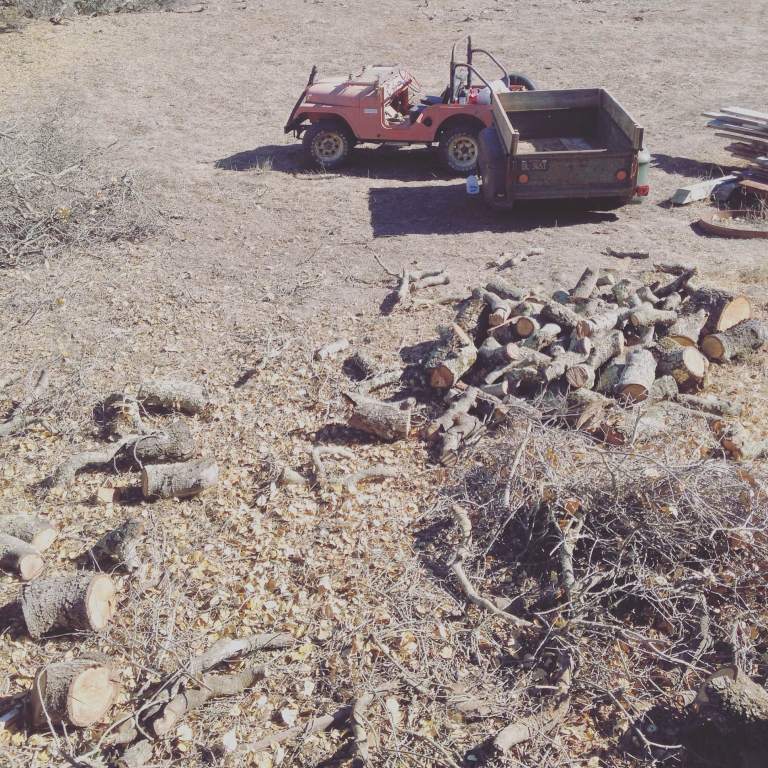 The branches around the loft came down ok. The big ones that stretched over my lower level were much trickier. 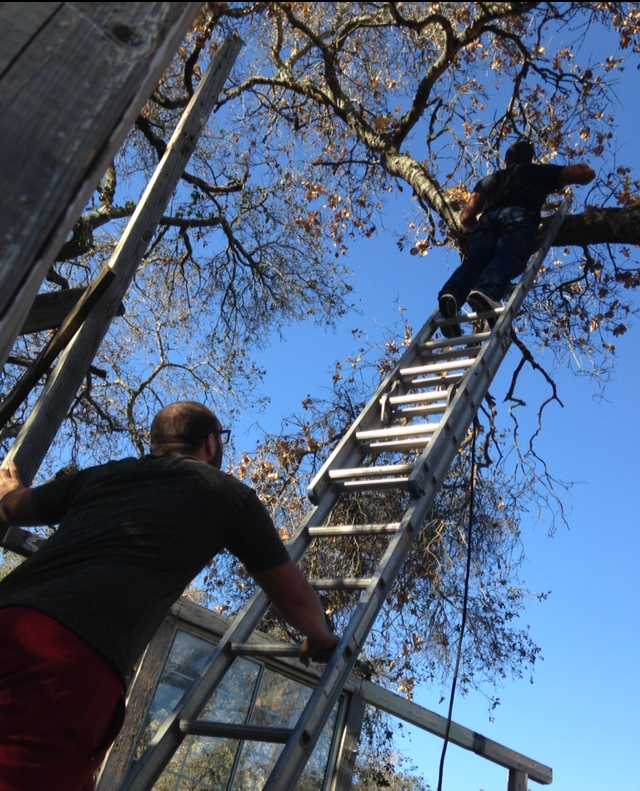 We tried tying this one off to another tree, using ropes, so that once it was cut, we could ease it down slowly, rather than having it come crashing down onto my house.

We should have wound the ropes around the tree instead of just draping them over the branch. It didn’t have enough leverage to hold that much weight, so the branch came crashing down anyways.

It jostled some of these beams lose, but it didn’t break any of them and it also didn’t break my window… Which is… kinda amazing.

Dad helped me get it off that window. I had a little rope burn… 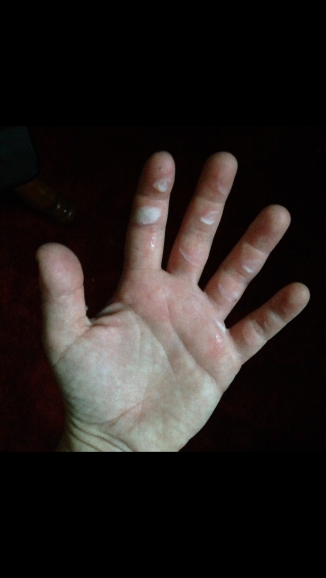 The last branch didn’t go so well either.

We piled up a bunch of little branches under it to try and break it’s fall so it wouldn’t crash through my floor.

It kinda worked, but the part that hit the edge didn’t have enough branches so it still busted through one of my 2×6 joists and some of the flooring plywood. Just a small patch though..

It looked like some kind of crazy storm had swept through my house.

It’s so different with all those branches gone!!!

And I won’t have to worry about a leaky roof or framing around branches. It will just be a nice little house with a tree trunk inside.

Now I need to get the roof done! But that will be for another blog.  🙂

3 thoughts on “A Little Less Tree, A Little More House.”